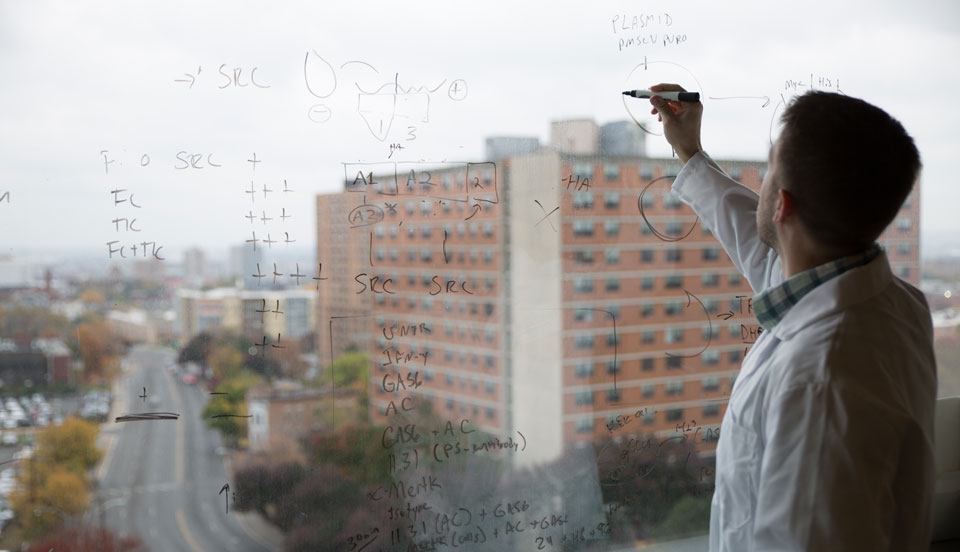 The Birge laboratory conducts basic science focused on the eradication of cancer.

Cancer arises in a multi-step process in which normal cells acquire mutations through the activation of oncogenes and the loss of tumor suppressive mechanisms. We are interested in examining the signaling pathways in cancer cells to understand the complex molecular events leading to tumor growth, invasion, metastasis, and immune evasion.

Role of Crk proteins in cell invasion and metastasis:

Crk is a small SH2 and SH3 domain containing protein and one of the most versatile genes in cells. Using these domains to assemble multi-functional protein complexes, Crk binds an astonishing number of proteins involved in cell proliferation and cell motility. The significance of Crk in human cancers has been enumerated in recent years. It is now apparent that Crk is overexpressed in several carcinomas and sarcomas, including breast cancer, lung cancer, glioblastoma, gastric cancer, synovial sarcoma, and ovarian cancer. We have observed that the level of Crk expression correlates with aggressive and malignant phenotypes as well as a more advanced stage of cancer. Our research employs structural biology, molecular biology, mass spectrometry, and animal cancer models to examine and analyze Crk and its function in invasion and metastasis.

Phosphatidylserine (PS) is an immunosuppressive signal in the tumor microenvironment that suppresses host anti-tumor immune responses:

Cell death (apoptosis) is a part of life. Each day millions of cells die and are cleared via efferocytosis, a process characterized by the engulfment of apoptotic cells in a manner that maintains tolerance by the ultimate release of non-inflammatory signals. Cell death is also very important in the tumor microenvironment whereby highly proliferating tumors have equally high rates of apoptosis, necessitating the demand for phagocytic cells to engulf apoptotic cells. Furthermore, we have observed that solid tumors show dys-regulation of phosphatidylserine (a phospholipid associated with apoptosis) as well as phosphatidylserine receptors that include members of the TAM family of receptor tyrosine kinases (Tyro3, Axl, and Mertk) that foster an immunosuppressive environment and suppresses host anti-tumor responses and prevents the immune system from killing cancer cells. Our multidisciplinary approaches set out to develop anti-cancer therapeutics that target PS and PS receptors in the tumor microenvironment, with the hope they will act akin to ìimmune checkpoint inhibitorsî to activate tumor immunity.